The Impacts of a Bankruptcy on a Wage Garnishment 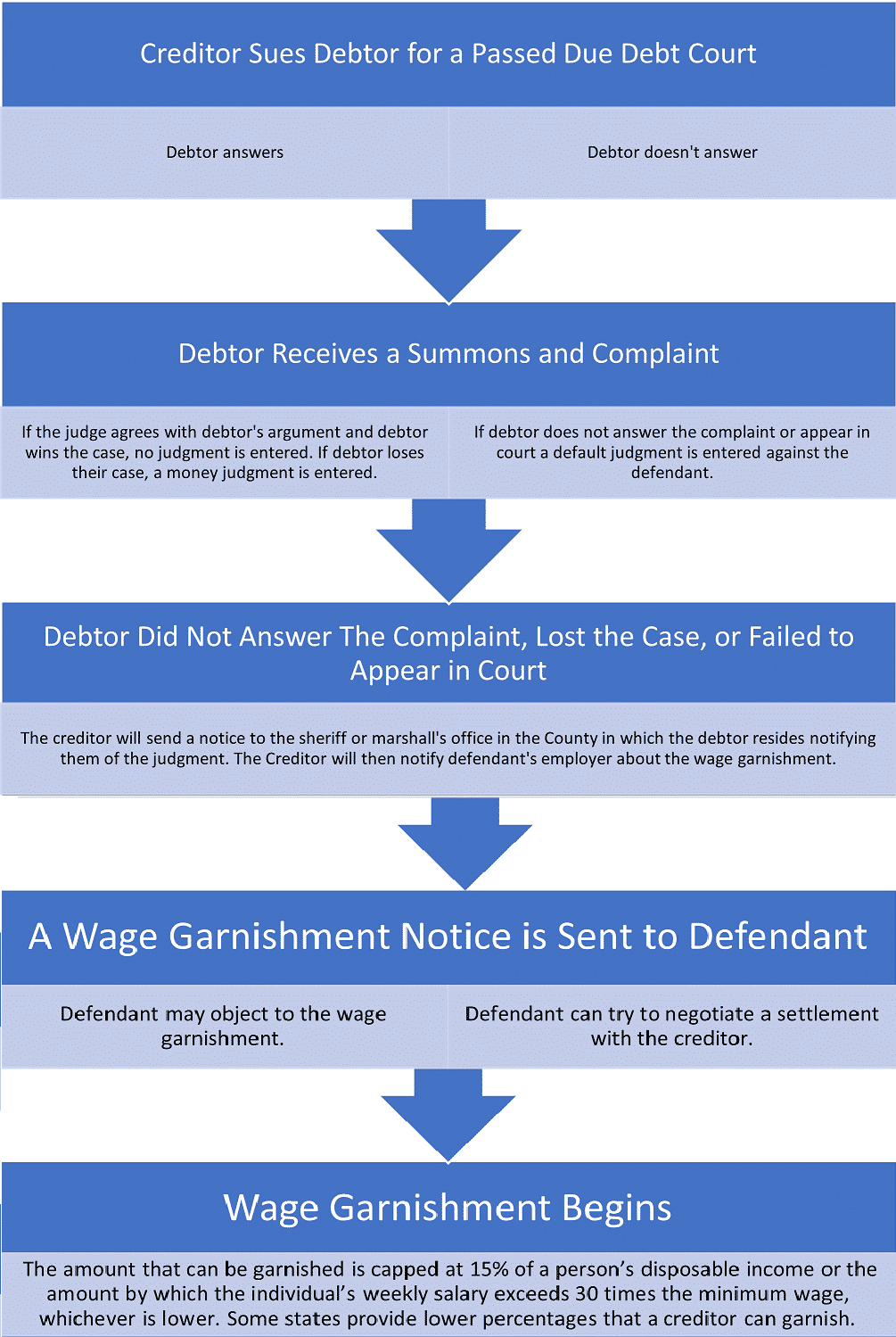 Many individuals that are behind on their debt, are often dealing with harassing creditors. The further an individual allows their accounts to go into delinquent status, the more likely it is that a creditor will sell their debt to a collection agency. Generally, when a person’s original creditor sells their debt to a collection agency, they will sell the delinquent account for pennies on the dollar. These collection agencies will pursue a lawsuit against the individual for the debt they owe if the individual refuses to pay their balance. When this happens, the individual runs the risk of having their wages garnished. Below we will discuss what a garnishment is, how a creditor can obtain one, and how bankruptcy impacts a wage garnishment.

What is a Wage Garnishment?

A wage garnishment is a notice issued by the court that tells an employer to withhold a certain amount of money from an individual’s paycheck each week. The money withheld is then sent directly to the creditor they owe until their debt is paid off.

Who Can Garnish Wages?

Generally, judgment creditors can garnish wages. This means regular creditors cannot garnish an individual’s pay without first obtaining a money judgment. Thus, individuals who fall behind on their bills do not have to worry about a creditor getting a garnishment against them until the creditor starts a lawsuit against them.

How a Wage Garnishment Begins

Some creditors may garnish a person’s wages without first obtaining a money judgment. This happens when an individual owes child support, back taxes, or student loans. People who fall behind on these types of debts should be on the lookout for letters notifying them that their wages will be garnished. Although these types of creditors do not have to get a money judgment to garnish a person’s wages, they must give them notice and time to object to the garnishment.

In some cases, an individual can be exempt from a wage garnishment. Each state has its own laws that allow certain people to be exempt from having their wages garnished. Generally, these types of wages cannot be garnished:

How Much Can a Creditor Garnish

Individuals who are already struggling to pay their debts can find a wage garnishment financially straining. Federal law limits the amount a creditor can garnish a person’s wages. The amount that can be garnished is capped at 15% of a person’s disposable income or the amount by which the individual’s weekly salary exceeds 30 times the minimum wage, whichever is lower. Some states provide lower percentages that a creditor can garnish. However, no state law can allow creditors to take more than what is allowed under federal law.

Can an Employer Fire a Person Because of their Wage Garnishment?

Many individuals who receive a wage garnishment are often embarrassed that their employers are notified. Most employers will not care that the individual’s wages are being garnished.

Individuals wondering if their employer can fire them or retaliate against them because of their garnishment should not worry. Federal law prevents employers from being able to take these types of actions against a person who has a wage garnishment. However, one exception to this is if a creditor sues an individual for more than one debt or two creditors initiate a garnishment, under these circumstances, there is no protection for retaliation under Federal law.

Filing bankruptcy can be a useful tool for individuals struggling to pay their bills and make ends meet. Under Chapter 7 bankruptcy, individuals can discharge their debt relieving them of any responsibility to repay their creditors.

Individuals who are facing a wage garnishment need to act quickly. Individuals should consider speaking with an attorney to determine what their best course of action should be. Most people will need to either pay back their debt in full, settle the account, or file bankruptcy. Individuals should speak with a professional as soon as possible so they do not give up their rights to object to the garnishment.  Individuals who have not received a garnishment notice but have recently been served with a lawsuit also need to take proper steps necessary to answer the lawsuit. Individuals who fail to answer a lawsuit run the risk of having their wages garnished which can make things much more complicated.